The Parkinson's Association of South Africa

The Parkinson's Association of South Africa (NPO 003-851) was first established in 1970. For the first 30 years it survived as a very small, privately funded unit, with most of its operations carried out by volunteers.

In 2000 Ms Karin Willemse took over as the Director of PASA and updated the organisation's operational system. Under her direction, the organisation achieved national status and began to successfully lobby for funding from the National Lottery.

PASA operates from modest premises in Randburg, Johannesburg, consisting of a reception area, a small office and two meeting rooms.

It employs one full-time member of staff, namely Ms Willemse, Director of the organisation. An administration executive, Ms Virgina Lahong, is employed half-days. Two additional part-time personnel complete the staff complement, namely Ms Gisela Stander who assists with training and provides bookkeeping services, and Ms Lee-ann Duarte who provides IT and communications services. The organisation has appointed a registered auditor and its financial records are available for inspection.

PASA focuses on the core activities of consultation and training, along with disseminating information. All services are offered free to the public. Although we do ask our members for an annual donation of R150, this is not compulsory and non-paying members as well as non-members of PASA are may benefit from our services. The public needs to be aware that no money is given to patients; they receive advice, but not monetary support. 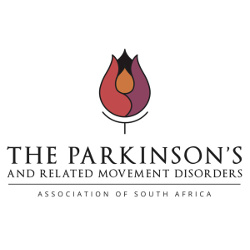 Our literature needs to be translated

The Parkinson's Association of South Africa

The Parkinson's Association of South Africa (NPO 003-851) was first established in 1970. For the first 30 years it survived as a very small, privately funded unit, with most of its operations carried out by volunteers. Learn more about PASA

Parkinson's disease is a degenerative disorder of the central nervous system. The motor symptoms of Parkinson's disease result from the death of dopamine-generating cells. In the brain, dopamine functions as a neurotransmitter—a chemical released by nerve cells to send signals to other nerve cells. In short, a person's brain slowly stops producing dopamine. With less and less dopamine, a person has less and less ability to regulate their movements, body and emotions.

While there are no researched statistics available on the number of people in South Africa afflicted with movement disorders, international statistics indicate that 2% of people over the age of 56 get Parkinson's Disease. Analysis of prescribed medication dispensed across South Africa suggests that there are some 15,000 people in the country suffering from movement disorders. However this figure excludes rural and marginalised communities where such disorders go largely undiagnosed and where the elderly, in particular, have little chance of consulting specialist physicians or accessing the right medication.